Consuelo Castillo Kickbusch is a renowned charismatic, passionate and influential speaker who carries her powerful message of what it takes to be an effective leader in today's global marketplace to hundreds of schools, colleges/universities, corporations, and government institutions, both in the U.S. and abroad. For the last ten years Consuelo has dedicated her life to empowering a new generation of Hispanic leaders and has worked with over one million children and their parents across the United States through Educational Achievement Services, Inc. (EAS), a company she founded in 1994. Read More >

Born and raised along the border in a small barrio in Laredo, Texas, Consuelo Kickbusch is all too familiar with the challenges of poverty, discrimination and illiteracy. Although she grew up without material wealth, she learned through valuable lessons taught by her immigrant parents that she was rich in culture, tradition, values and faith.

The values she learned as a child were reinforced throughout her career in the U.S. military. After graduating from Hardin Simmons University, Consuelo entered the U.S. Army as an officer and served for two decades. During that time, she broke barriers and set records in the military where she became the highest-ranking Hispanic woman in the Combat Support Field of the U.S. Army. When the opportunity to assume a command post arose, LTC Castillo Kickbusch  retired and dedicated her time to operating Educational Achievement Services, Inc. and fulfilling her mission of preparing tomorrow's leaders today.

As trademarked tools to reinforce her messages, Consuelo produced two videos titled "¿Porque No-Why Not?" and “Journey to the Future.”  Additionally, she published a book titled Journey to the Future: A Roadmap for Success for Youth which provides practical techniques for children to develop higher self-esteem, achieve their person goals, as well as provide them with a framework for early leadership development.

In1998, Consuelo Kickbusch and a team of educators created the Family Leadership Institute (FLI) a multi-faceted educational program focused on providing immigrant/migrant Hispanic families, with knowledge, tools and inspiration to help their first and second generation children succeed in school and in life. In the past four years, the Family Leadership Institute, a branch of EAS, has graduate approximately 2,000 parents in five states. Qualitative studies conducted in 2005 resulted in significant changes in both school attendance and higher grades.

Consuelo has numerous awards and citations from educational institutions, government agencies, professional organizations, as well as the national media. In 2005 she was honored with the prestigious National Mujer Award by the National Hispana Leadership Institute (NHLI).  Also in 2005, Consuelo received the Society of Our Wise Women Award from Bennett College and has been appointed to their Board of Trustees. Consuelo was also honored with 2006 Hispanic Heritage Foundation Award for leadership and the Vista Magazine Award for education.

In the national media, Consuelo Kickbusch has been profiled on the Lifetime Network, National Public Radio, O Magazine, the syndicated television program “Hispanics Today,” Hispanic Business magazine's “100 Most Influential Hispanics in America,” Latina Style, Vanidades, and Glamour. Features on Consuelo Kickbusch have also appeared in English and Spanish language newspapers across the country. In the book, "Mustang Sallies: Success Secrets of Women Who Refuse to Run with the Herd," Fawn Germer lists Consuelo Castillo Kickbusch among other women “who've got the brains, the guts, and the drive to change the world...”

Leadership traditionally is a lonely and complex job to accomplish. Leaders and educators are expected to be the ones with the answers while taking charge of morale and team support. How then does courage play a unique role in leadership especially during a time of crisis? Consuelo’s journey has been a lifetime of Courageous Leadership beginning when she left her traditional home where she was raised in an Immigrant Mexican home to becoming the highest ranking Latina in combat support field in the US Army; and then later starting a small business company without any outside income all while facing discrimination. Through her humor, reflection, and utilizing her story telling gift, Consuelo shares her wisdom and Servant Leadership framework. Every participant will walk away with another “tool “for their Leadership Toolkit and some perspective on how Courageous Leadership can get you through the storm. Her favorite words are, “This Too Shall Pass.”

Are you living your legacy? A legacy is not just something a person leaves behind after they die; rather it is the way in which they live their life. Through an interactive and introspective presentation, Consuelo Castillo Kickbusch guides participants through their vision of the future and the goals that they want to accomplish for themselves and for their community. She inspires and challenges participants to become living legends in their professional and personal lives. Her unique emotional style of delivery that has the audiences rolling with laughter, attempting to hold back tears and inevitably on their feet in a standing ovation. Through humor and hard-hitting facts she encourages participants to be servant leaders at work and in their community. Participants learn to live their legacy by leading with their soul.

Leadership is not about you. Leadership is about serving. This keynote addresses the philosophy of servant leadership and one’s call to duty. Using her life as an example, from barely surviving in the barrio of Laredo, Texas to receiving an award from the President at the White House, Consuelo serves her audience by challenging them to look inwards and rise to the call of action. In this presentation, Consuelo stresses the importance of Preparing Tomorrow’s Leaders Today! The audience will not leave without hearing the message that “leadership” is not just a framed, wall decoration, but it is an action that one must take for the betterment of his community and the generation to follow. Her lectures on Servant Leadership move audiences to standing ovations, and move people to serve.

This keynote provides participants with the different dimensions of diversity in today’s environment. Learning to accommodate cultural differences is important for managers and employees in order to be successful in the work environment. Moreover, it is important in parenting and education as well. Aspects of cultural differences, strengths and challenges will be examined and examples will be provided. LTC Kickbusch will provide her personal story of challenges and triumphs as a child of the “barrio” who succeeded in spite of many cultural, social and educational obstacles. She gently guides her audience to a better understanding of cultural differences and similarities, as she emphasizes that appreciation of diverse cultures and their contributions to today’s society is a very important element of team-building and team-work, which makes for a successful, productive work environment. LTC Kickbusch will provide insights on yet another necessity for successful professional development and personal growth. This introspective keynote will force participants to look inward at themselves, their work environments, and communities and motivate them to take action.

A student will spend a minimum of 1,000,000 minutes in your classroom. How will you choose to help a student spend that vital time in their life? Are you a dream maker or a gatekeeper? Consuelo shares with the audience her journey from a humble background to the high levels of success through humor and reflection. In this session participants will heighten their awareness of what Consuelo calls the “emotional intelligence” of every student’s journey.

H.O.M.E.: 4 Steps to Not Allowing the Pandemic to AFFECT Your H.O.M.E.

This pandemic will change our lives forever. It's rewriting history with each day, but we write the history of our family - and no pandemic can affect that. Each day we wake up, and that in itself is a blessing; bringing the opportunity to maximize our joy, strengthen our family, and create a legacy by becoming a role model. Read More >

The power of Healing

O- It's going to be Okay

Leverage your talents as a family

Vision - Not just a metaphor

This keynote focuses on reflecting on ones traditions and values of times past and their importance in our development and growth today. Appreciation of diverse cultures and their contributions to today’s society is emphasized. We can “go forward without forgetting” what a rich heritage our cultures offer, and apply under-appreciated ethics and values to today’s world. The issues of self-esteem and leadership styles are presented in a context in which the past is melded with the present, and offers alternatives we can use in our personal development that will enhance our leadership styles. This is especially relevant to professionals going into the 21st century with a renewed spirit to meet new challenges, pursue higher educational opportunities, and to cherish the joys of living in today’s world!

"Our event with Consuelo was a HIT! She is so down-to-earth and personable and her message is so relevant; it hit home with so many. Her story resonated with so many of our teachers. Consuelo Castillo Kickbusch was a joy and an inspiration…a great kick-off to our year!"

"Legend-dary!!! Best speaker of the day. I collect surveys at the end of the summit and everyone rated her tops. She resonated with the audience."

"Ms. Kickbusch was a big hit! She made us laugh and then she made us cry, but at the end, she tied it all together to educate our guests and funders that quality healthcare is so needed for the underserved and uninsured living in our communities regardless of the zip code they live in."

"Lt. Kickbusch was amazing. Every eye was crying, everyone was laughing, and every heart was opened. She is truly inspiring!"

"Consuelo was a mega hit at our conference last night! She always delivers, but got the Big Standing O from our attendees! Many people expressed after she finished today how inspiring she was."

"She was wonderful…we had an exceptional turnout with about 135 people. There was not a dry eye in the house at the end."

"She was absolutely amazing and our attendees loved her! We could not have been more pleased. Well received and just a wonderful woman, person and speaker! I could go on and on."

Journey to the Future: A Roadmap for Success for Youth 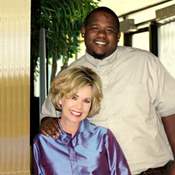