Mark Potok is an internationally renowned expert on the American radical right who for 20 years helped lead the legendary Southern Poverty Law Center in exposing hate groups, right-wing terrorism, and the rapidly increasing infiltration of extremist ideas into the political mainstream. Read More >

In that role, Potok faced numerous death threats from white supremacists and constant vilification by leaders of the far-right media — a remarkable measure of just how effective his work was. Potok has been described in one book on social justice activists as having “a reputation as the preeminent editorial commentator who follows the American radical right.”

As the director of the SPLC’s Intelligence Project and, later, Senior Fellow at the SPLC and Editor in Chief of its award-winning Intelligence Report investigative magazine, Potok was a key spokesman for the SPLC, a civil rights organization based in Alabama. He has testified before the U.S. Senate, the United Nations High Commission on Human Rights, the Helsinki Commission, and in other key venues. An acclaimed and dynamic speaker, he has given scores of keynote talks in university, government and other settings throughout the United States and Europe. They include such prestigious forums as the U.S. Holocaust Memorial Museum.

Potok’s study of the radical right began even before he joined the SPLC in 1997. As a national reporter, he covered the 51-day siege in Waco, Texas, that led to the antigovernment militia movement; the Oklahoma City bombing and the trial of mass murderer Timothy McVeigh that followed; and many other instances of right-wing extremism and violence. He has led numerous investigations into various aspects of right-wing extremism, winning key awards for investigative reporting and other journalistic efforts for himself and for the Report. He has personally confronted media personalities including Lou Dobbs and Bill O’Reilly on their television shows and in other venues over their false extremist claims.

While at the SPLC, Potok was interviewed literally thousands of times, including appearances in most national U.S. newspapers, television news programs and radio shows, along with hundreds of local, regional and international media. He has been featured in more than 20 major documentaries on various aspects of the radical right. He was described by the Utne Reader, which in 2009 named the Intelligence Report the best investigative magazine in America, as having “the disciplined focus of a detective,” and he has been profiled by The Associated Press and, in a 43-minute interview, by Terry Gross of the celebrated NPR program, “Fresh Air.” He has been cited in dozens of scholarly books on the American radical right.

Potok’s speeches have covered a very wide range of topics related the extreme right, exploring such key themes as the reasons for the rise of the radical right; the history and dangers of right-wing terrorism; the organized groups behind the anti-immigrant, anti-LGBT, anti-Muslim, anti-Semitic and other specific movements; the increasing internationalization of hate; digital media’s role in spreading hate; the rise of misogyny and the so-called Alternative Right; the militia movement and the historic American struggle over public land use; women on the far right; and many more. He tailors every speech to the interests and needs of his audiences.

At a time when the radical right is closer to political power than at any moment in at least half a century, Potok’s message could hardly be more important. Political developments ranging from the recent U.S. presidential race to the rise of racial nationalist parties in Europe underline the admonition from the great Spanish-born poet Santayana: “Those who do not learn history are doomed to repeat it.” Mark Potok is a captivating speaker who can explain not only how we have come to the place where we find ourselves today, but also what we can do to confront the rise of the radical right and come together to make our world a better home for all. Read Less ^

The Rise of the Radical Right: The Patriot Movement

The Rise of Misogyny

The Trump Administration and the Rise of Anti-Semitism

From Berlin to Bannon: The Rise of the Radical Right

When the Berlin wall came down in 1989, massive historical forces that had been frozen in place for 40 years were unleashed, setting the stage for the resurgence of racial nationalism, a backlash against globalization and free trade, and the growing ascendancy of the radical right in the United States and Europe. Today, to the shock of many a historian and political scientist, right-wing populism is in the saddle in a way that has not been approached since World War II, as symbolized in the naming of Stephen Bannon as a top aide to President Donald Trump. How did we get here? How can we fight back against the forces that are tearing apart our communities and threatening decades of social progress? In a presentation rich in anecdotes and penetrating insights, Potok explains the world we live in today.

On the Front Lines: 20 Years on the Hate Beat

In this talk, Mark Potok discusses two decades in the trenches as a scholar activist exposing and confronting the radical right. From outing the neo-Nazi leader who is secretly partly Jewish, to exposing the Klan links to “Heritage not Hate” Southern white activists, to taking on the extremist claims of television personalities like Bill O’Reilly and Lou Dobbs, Potok was at the heart of the battle. This colorful talk goes in depth into the bizarre personalities, the incredibly dangerous terrorists, the wild-eyed conspiracy theories, and the far-out religious beliefs that characterize the American extreme right — and it explains how extremist ideas increasingly have infiltrated the political mainstream. Potok describes some of his own frightening encounters with violent radicals, but he also outlines how we can fight back. His years in the front lines battling hate offer invaluable lessons for the rest of us.

Can gay people be “cured” of their homosexuality? In recent years, as LGBT people have made a whole series of historic gains, activists on the religious right have swapped their earlier demonizing rhetoric for the claim that gays and lesbians can be “fixed” by so-called “ex-gay” or “reparative” therapy. But that assertion is an utter falsehood, reminiscent of the Nazi “science” of phrenology, which used skull measurements to determine the “racial worth” of individuals. After extensive research into the sexually bizarre practices of the reparative therapists and some of the sadistic techniques of their predecessors, Potok shows why it’s not much of a surprise that more and more communities are banning the practice for minors.

News, ‘Fake News’ & the Building of the Intelligence Report

As the electronic revolution continues to upend the traditional news media and “fake news” inundates the Internet, a new type of journalism is increasingly coming to the fore: highly specialized publishers like Pro Publica and The Marshall Project that frequently operate as nonprofits. One of the pioneering examples of this kind of public interest approach to journalism — and an important early enemy of the lies and conspiracy theories now known as fake news — is the Intelligence Report, an investigative magazine specializing in the radical right and published by the Southern Poverty Law Center. As Editor of the publication for 20 years, Mark Potok built the Report into what SPLC co-founder Joe Levin calls “a sophisticated magazine that is now distributed to and relied upon by state and federal law enforcement all over the country, among others.” In this talk, Potok explores the building of the award-winning periodical, its take-no-prisoners approach, and its use as a key advocacy tool by American progressives.

Is there a “war on women”? From conservative attacks on reproductive rights and contraception to a president who boasts about grabbing women by the genitals, American women are facing a mounting backlash — a jihad against feminism and many of the social advances of the last century. Fueling this poisonous and often violent brew is the so-called “manosphere,” a shadowy online world where “men’s rights activists” rub shoulders with “corrective rape” advocates, “pickup artists,” “men going their own way,” and even a female auxiliary of “honey badgers.” Potok discusses a history of misogynistic terror that began with the 1989 murder of 14 women in Montreal, exploded in the public mind with the “Gamergate” attacks and others, and now finds a comfortable home in the so-called Alternative Right.

Anti-Semitism and the Radical Right: It’s Getting Worse

It’s been called “the world’s oldest hatred,” and anti-Semitism is still alive and well today. In fact, to the surprise of many, Jews, not Muslims or other religious minorities, are the target of the vast majority of religiously motivated hate crimes in the U.S. Over the last 50 years, the American radical right — long obsessed with the alleged dangers of black people — has been Nazified, and this demonization of Jews as the chief enemy has reached new heights in the age of globalization, free trade and ascendant right-wing populism. What’s behind the continuing scourge of Jew hatred? Potok discusses the rise of the bizarre and anti-Semitic theology of Christian Identity, the role of the late American Nazi Party founder George Lincoln Rockwell, the critical part played by Holocaust denial, and the way that changes in the world economy have made Jews a particularly ripe target for hatred.

"Mark is an excellent speaker and panelist and without any doubt one of the leading international experts on the radical right with a wide knowledge of hate groups, right-wing terrorism, conspiracy theories, and the American radical right in particular."

"No one understands or has more experience in the rise of domestic hate groups in America than Mark. He gave this under reported and critical issue the public scrutiny it so richly deserved."

"Mark Potok is one of the most powerful speakers in the country on the dangers of hate. When Mark speaks, the audience is riveted. If knowledge is power, Mark Potok's speeches provide a jolt of it, giving people a deep understanding of what we’re up against as hate groups thrive in these perilous times."

- Founder, Not in Our Town

"There is no one more knowledgeable about hate and extremist groups in the United States than Mr. Potok, who has spent the last 20 years investigating organized groups that promote and perpetrate acts of domestic terrorism and hate crimes,. Mr. Potok’s speech powerfully engaged an auditorium of 500 people, reminding us of the fierce urgency to address these challenges in our own time."

"An advocacy journalist with a martini-dry disposition, Potok moves with the disciplined focus of a detective and never passes an opportunity to reveal uncomfortable truths about society’s well-armed underbelly. His passionate acceptance speech was the evening’s highlight!"

"Mark is a dynamic, well-informed, engaging and energetic speaker. I still vividly recall Mark’s keynote speech. The audience was captivated by the drama of the stories he related from his rich personal experience and the work of the Southern Poverty Law Center. The crowd was riveted, fully attentive, eager to catch every word. Mark also received outstanding reviews from U.S. Department of State international visitors from Russia to Rwanda to Saudi Arabia to France, Ukraine, India, Indonesia, Turkey, and many more."

"Mark Potok is one of the nation’s leading experts on the radical right and has a long record of handling public appearances and live TV interviews like a pro. He clearly and concisely explains the history, philosophies, and connections between various extremist groups and their leaders in a way that’s easily understandable — and frightening as well." 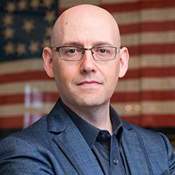