Michael Greyeyes is a multi-faceted, award-winning artist, educator, and leader.  He is a proud Nehiyawe (Plains Cree) from Muskeg Lake Cree Nation in Saskatchewan, Canada and is the founding Artistic Director of Signal Theatre, a Canadian theatre company that creates intercultural and transdisciplinary performance work.  He is most well-known for his work as an actor, with a twenty five year career in film and television, including the feature film Woman Walks Ahead, co-starring Golden Globe winner and Oscar nominated actress Jessica Chastain, in which he plays the iconic Hunkpapa spiritual leader, Sitting Bull.  Read More >

Mr. Greyeyes has shattered boundaries wherever he has encountered them.  He was the first Indigenous boy to ever graduate from Canada’s National Ballet School, a world-renowned classical ballet training academy, before joining The National Ballet of Canada, Canada’s leading professional dance company. He choreographed and directed the first Cree-language opera, “Pimooteewin,” with libretto by legendary Cree author Tomson Highway and was the first Indigenous professor in the Department of Theatre at York University.

After dancing with The National Ballet of Canada and with the company of Eliot Feld in New York City, Greyeyes began working as an actor, where he has created an incredibly diverse body of work both on stage and extensively in film and television for nearly 30 years.  Selected credits include his landmark performance as Hunkpapa Chief Sitting Bull in Woman Walks Ahead, co-starring with Academy Award nominated and Golden Globe-winning actress Jessica Chastain, that premiered as a gala presentation at the 2017 Toronto International Film Festival, Saints and Strangers (National Geographic), Klondike (Discovery), Terence Malick’s The New World, Skinwalkers and We Shall Remain (PBS), and Passchendaele, Paul Gross’ World War I feature that opened the 2008 Toronto International Film Festival.  Most recently he was seen as Qaletaqa Walker, a recurring character on season 3 of AMC’s hit show Fear the Walking Dead.

His work as a theatre director is ground-breaking.  In 2009, he directed Daniel David Moses’ play Almighty Voice and His Wife at Theatre Passe Muraille for Native Earth Performing Arts.  This seminal production was also invited to Origins, the inaugural theatre festival for First Nations in London, England and has subsequently toured across Canada in 2010, most recently at the PuSh Festival in Vancouver in 2012.

In other mediums, he created performance art work in collaboration with visual artist Rebecca Belmore  (“Gone Indian”) for Scotiabank’s Nuit Blanche in Toronto and “Dance to the Berdashe” with long-time collaborator & visual artist, Kent Monkman.  He also wrote and directed “Seven Seconds,” a short film that premiered at the 2010 imagineNATIVE  Film + Media Arts Festival.  In that same year, he created “Winter Home,” an installation and solo performance work, examining his own family’s wintering history, that was subsequently performed at the Prismatic Festival in Halifax, Nova Scotia.

For Signal Theatre, he has directed and choreographed a number of full-length dance theatre works, including A Soldier’s Tale that delves the intense aftermath of war on soldiers and their families. In 2015, he wrote and developed Nôhkom, directed by Yvette Nolan, at the Banff Centre’s Playwrights Colony, exploring the life of his paternal grandmother, Margaret Greyeyes. In June of 2017, Signal premiered its most ambitious work yet, “Bearing,” a searing examination of Canada’s Indian residential school legacy at Luminato, Toronto’s internationally acclaimed theatre and music festival.

Mr. Greyeyes is an Associate Professor at York University and was Graduate Program Director of the MFA Performance Stream in the Department of Theatre from 2014 to 2017. His scholarly work includes publication, keynote addresses, and performative manifestos, such as Inside the Machine (London, UK) and Staging Ethnicity (PuSH Festival, Vancouver).  He is married to his wife of 22 years, Nancy Greyeyes, a former dancer and current dance teacher. They live in Toronto, Canada, with their two daughters. Read Less ^

An Evening with Michael Greyeyes

"We LOVED him! So authentic and nurturing with our students. He spent so much time with them. Clearly he made an impact. My boss was saying we should plan to have him back. His Keynote was also genuine and optimistic, things we all needed to hear as we struggle onward, putting our best selves forward for the students we dearly love. I'm so glad we were able to have him on campus! You and the bureau were also fantastic to work with. Everything was so seamless!"

- The University of Alabama at Birmingham

"The events with Michael went amazing. His presentation was one of my favorites in a long time. The performance aspects that he wove through it along with the way in which he spoke about his experiences and his stories was a real treat. I do not think I have seen anything like that before. And I was not the only one to think so."

"In an extremely engaging and memorable performative keynote address, he captivated the evening audience. His unique perspective on the film industry, as seen through the eyes of an Indigenous actor, was enlightening and educational. This performance was humourous, poignant and a joy to watch. Whether speaking to a small group or a large one, Michael is a highly effective public speaker. His professional yet real and personal talks positively impact all who hear him. Michael is a genuine person who can connect to each audience member and make them feel he is talking directly to them." 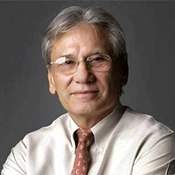