As a 10-year-old girl fascinated by Star Trek and Carl Sagan’s Cosmos, Nagin Cox had a dream of exploring space. And through incredible determination, a fighting spirit and a never-quit attitude, she has done just that. Cox has been a spacecraft operations engineer at NASA’s Jet Propulsion Laboratory (JPL) for more than two decades and has played a key role on a number of robotic space exploration missions. Read More >

A native of Bangalore, India, Cox grew up in Kansas City, Kansas, and Kuala Lumpur, Malaysia. As a young woman raised in a Muslim/multi-cultural household, she realized how easily we separate ourselves based on gender, race or nationality. This experience inspired her to do something that brings people together instead of dividing them. The Space Program helps the world “look up” and remember that we are one world, she says.

At JPL, Cox has held leadership and system engineering positions on multiple interplanetary robotic missions including the Galileo mission to Jupiter and four of the five rovers the United States has sent to Mars, as well as the Kepler exoplanet hunter. She is currently a Tactical Mission Lead on the Mars Curiosity Rover, as well as an Assistant Mission Manager on the Operations Team of the Mars2020 Perseverance Rover.

Before joining JPL, Cox served in the U.S. Air Force as a Behavioral Psychologist and System Engineer in F-16 Aircrew Training and then as a Space Operations Officer at NORAD/US Space Command. Nagin holds engineering degrees from Cornell University and the Air Force Institute of Technology, as well as a psychology degree from Cornell. Sometimes she is not sure which one she uses more — the engineering degree or the psychology degree! Nagin is honored to be the namesake for Asteroid 14061. She has also received the NASA Exceptional Service Medal and two NASA Exceptional Achievement Medals.

Nagin is an award-winning speaker for both NASA/JPL and the U.S. Department of State. She has spoken to audiences around the world on the stories of the people behind the missions, as well as leadership and the importance of STEM worldwide. TED called her a “first generation Martian” in her talk on one of the humorous sides to robotic space exploration.

Cox is a past member of Cornell University’s President’s Council for Cornell Women and has served on the boards of Griffith Observatory Foundation and Impact Personal Safety: Self-Defense & Empowerment for Women. She currently serves on the Advisory Committee for the Women’s Rights Division of Human Rights Watch and is an Advisory Council Member for The Planetary Society.

In her downtime, Nagin has raced with her dragon boating team, competed in sprint triathlons, participated in CalTech Theatre and sung with a Sweet Adelines barbershop chorus. She also enjoys exploring this planet with her husband. Read Less ^

TED: What Time Is It on Mars?

In 2004, 2012 and in February 2021, Nagin Cox was in mission control when the famed Mars Rovers landed on the Red Planet. As part of the courageous and inventive teams at NASA’s legendary Jet Propulsion Laboratory, Nagin tells interplanetary stories of the people behind the missions that robotically explore our solar system and the logistics of living on earth but working on mars. She also shares examples from commercial space projects. Read More >

Nagin’s story of her nontraditional journey to NASA is filled with the importance of diversity in skill sets and insights on how perseverance pays off — especially during a pandemic. In 2020, the whole planet suddenly got a crash course in the kind of working in isolation that is a huge part of space exploration. Stories of space exploration — including the latest commercial endeavors — have an enduring ability to inspire and motivate people all over the world and to cut through political/cultural issues and remind us of what humankind can do together. Filled with heart and humor, this popular presentation highlights the challenges that ensue when humans try to live on one planet and work on another. Read Less ^

How High-Performing Teams Can Achieve the Impossible

Trying to achieve what seems like the unattainable on a daily basis is no easy feat. But when you have an incredible team and leader in place, it’s definitely doable. In this fascinating talk, Nagin Cox, a spacecraft operations engineer at NASA’s Jet Propulsion Laboratory, former U.S. Air Force Space Operations Officer at NORAD/US Space Command, shares stories of what it takes for a team to seamlessly work together. Through personal stories, Cox reveals how her crews have successfully collaborated — even in the middle of a pandemic — the importance of mission and goals and how communication is critical to success. They are lessons that can easily be transferable to your team, so they can reach for the stars, too.

The Importance of DEI

Throughout her career, Nagin Cox has received a lot of accolades. But none means more to her than what her mother used to call her: “my fighting daughter.” And fight she did. As a woman of color raised in a Muslim/multi-cultural household, she wasn’t sure how far she could go. There were many challenges. But she never gave up on her dreams of exploring space by working for NASA’s Jet Propulsion Laboratory (JPL). Read More >

In this presentation, Cox will share the story of her childhood journey and how she persevered — leading to her dream job. As a former US Air Force officer, an IBM engineer and as one of the leaders of several missions at JPL, Cox has amassed a body of lessons learned in inclusion, diversity and coping as she has had the chance to work alongside some of the world’s brightest. Using her trademark humor, she’ll explore the critical importance of DEI, where everyone matters, feels welcome and has a chance to succeed, and how it can help your organization, too. Read Less ^

When it comes to leading a team, it doesn’t get much more multi-faceted than working with some of the world’s brightest engineers and scientists. But Nagin Cox has done just that. With more than two decades working at NASA’s Jet Propulsion Laboratory (JPL), and as a former U.S. Airforce Space Operations Officer at NORAD/US Space Command and an IBM engineer, Cox has unintentionally amassed a body of lessons learned in leadership, psychology, system engineering and STEM. In this presentation, she’ll share her journey and the significance of teamwork, adapting to unusual circumstances and why communication is so critical to success. She’ll also discuss the importance of perseverance and how it can pay off for you and your teams, too.

Engaging Students in STEM: Preparing the Next Generation

In an increasingly complex world, STEM education is more important than ever. A background in science, technology, engineering or math allows students to succeed in any industry. Just ask Nagin Cox, whose life has been filled with all four. She’s a spacecraft operations engineer for NASA’s Jet Propulsion Laboratory (JPL). Before joining JPL, she served in the U.S. Air Force as a Space Operations Officer at NORAD/US Space Command and as an IBM engineer. In this presentation, Cox will share her journey and the importance of preparing the next generation for the world to come. She uncovers why a background in STEM is so important and new approaches to excite kids about STEM. She’ll also share why it’s critical for students to dream bigger and why shifting perspective can land them their dream jobs.

“….Went very well. Nagin was such a pleasure to work with and her warmth was infectious. Her speech covered all relevant points and fit for the occasion. Totally loved it. Thank you for making it so easy for us.”

“It was fantastic! Got a lot of excellent feedback about her speech and fun to spend the day with her. Thank you for connecting us.”

"What an inspirational and incredible message you shared."

"Thank you again for your help in finding Nagin for us- she was fantastic."

"Your story regarding little girls being told they're worthless is what caught my attention. I had a childhood seeped in disrespect and under appreciation towards women as well. I wish more little girls could be inspired by women like yourself. I wanted to let you know, this morning when I really needed it, I found inspiration in your story."

"I have shared my experience of your presentation at the CLM event in 2015 and just how inspirational it was for both myself and the entire audience. The combination of overcoming engineering challenges on the Mars mission and STEM challenges in school was fascinating. One of the best ever!"

"Her visit to Brazil changed my life and of young students who witnessed the lecture given by her."

- Professor of Natural Sciences at the State College Plataforma

"Ms. Cox gave a passionate talk on her involvement with the Galileo mission to Jupiter and her transition into the Mars missions. It was one of the best talks ever experienced [in over 35 years of planetarium conferences].  We strongly recommends her as a speaker!" 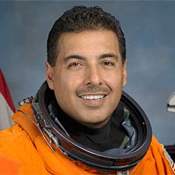