Peter Schiff is the CEO and Chief Global Strategist of Euro Pacific Capital, an SEC- registered investment adviser and a full-service broker/dealer. He is one of the few widely known economists and investment professionals to have spoken about the financial crisis of 2008 before it began. As a result of his views on the destructive nature of monetary stimulus, as well as his colorful views the U.S. economy and the financial markets, he has become one of the most widely recognized personalities in the economic world. He is known for his advocacy for free market economic solutions and for his preference for non-dollar and commodity-focused investments in countries with positive fiscal characteristics. Read More >

Mr. Schiff has been quoted hundreds of times in leading news outlets around the world, including The Wall Street Journal, Barron's, Die Zeit, Tokyo Shinbun, South China Morning Post, Investor's Business Daily, The Financial Times, The New York Times, The Los Angeles Times, and The Washington Post. He regularly appears on CNBC, CNN, Al Jazeera, Fox News, and Fox Business Network. His best-selling book, Crash Proof: How to Profit from the Coming Economic Collapse was published by Wiley & Sons in February of 2007. His fourth book, The Real Crash – America’s Coming Bankruptcy was published by St. Martin’s Press in May of 2012. His award-winning illustrated economic primer, How an Economy Grows and Why It Crashes, was first published in 2010.

Mr. Schiff began his investment career as a financial consultant with Shearson Lehman Brothers, after having earned a degree in finance and accounting from U.C. Berkeley in 1987. A financial professional for more than twenty years, he joined Euro Pacific in 1996 and served as its President until December 2010, when he became CEO. An expert on money, economic theory, and international investing, he is a highly sought after speaker at conferences and symposia around the world. He served as an economic advisor to the 2008 Ron Paul presidential campaign and ran unsuccessfully for the U.S. Senate in Connecticut in 2010. He resides in Connecticut and Puerto Rico with his wife Lauren and two young children. Read Less ^

The Crash of the U.S. Bubble Economy

The Future of the Economy (The Atlantic Monthly Panel)

The economic collapse that Peter Schiff had long foretold has finally come to pass. The stock markets have plunged, the housing market has collapsed, and the government’s budget is soaring out of control. The Federal Reserve is printing money by the trillions in a vain effort to stabilize the situation. Amidst all the carnage, investors and economists still do not understand the root cause of the problem and are therefore proposing reckless solutions. Because so few understand fundamental economic principles, it should not come as a surprise that many investors cannot see the inevitable result of Washington’s response to the crisis. In particular, the US dollar, which has paradoxically benefitted from a “flight to safety” of late, is poised to become a nearly worthless currency. All investors need to be cognizant of this possibility as they look to protect their wealth for themselves and future generations.

How an Economy Grows & Why It Crashes

How to Prepare for America’s Coming Bankruptcy

How to Position Your Organization for the Coming Global Power Shift

Economics in One Easy Speech 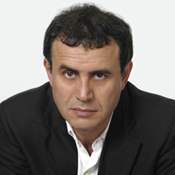