Combining expertise gained as a senior official in five Presidential administrations – during which he worked closely with Secretary Henry Kissinger in normalizing relations with China and Middle East Peace Negotiations to working with Secretary Hillary Clinton on opening up foreign markets to American products and businesses -- and 25 years as an Investment Banker on Wall Street, Robert Hormats brings a multifaceted, internationalist perspective to a multitude of subjects. These range from world financial markets, investment, energy and trade to managing business risks and maximizing business opportunities in today’s volatile, globalized economy. Whether he’s discussing China’s New Silk Road Initiative, the risks and opportunities of the lifting of Iran sanctions  or corporate hazards in an age of terrorism, Hormats leaves audiences with a highly informed understanding of their world— and timely strategic guidance on how to navigate it. Read More >

Robert Hormats is currently Vice Chairman of Kissinger Associates, the New York-based strategic international consulting firm. In this role, he utilizes his expertise in international trade and investment, intellectual property protection, global energy issues and other areas to assess and navigate geopolitical and macroeconomic risk for his clients. Previously, he was on Secretary of State Hillary Clinton’s senior leadership team as Under Secretary for Economic Growth, Energy and the Environment. He came to this role after a quarter century at Goldman Sachs, ultimately as Vice Chairman (International).  His earlier career was spent as a Senior Staff Member on the National Security Council, serving as Senior Economic Advisor to Dr. Henry Kissinger, General Brent Snowcroft and Dr. Zbigniew Brezinsky , followed by prominent positions at the State Department and as a Deputy U.S. Trade Representative with the rank of Ambassador.

Drawing on a career that placed him at the center of historic events that include the opening of China in the 1970’s and Middle East Shuttle Diplomacy, leadership of US negotiating teams with India, Russia, Japan, China and the EU,  Hormats casts new light on current topics such as the changing economic order in Asia, counter-terrorism strategies, and geopolitical uncertainty. Eloquent and expert, his content-rich presentations leave you better informed – and better prepared for the global challenges that lie ahead. Read Less ^

Robert Hormats leverages more than 90 trips to China, 40 years of working closely with Chinese authorities beginning during the era of Mao Tse-Tung and Deng Xioapeng, his position as Chairman of the Board of the RAND Center for Asia-Pacific Policy to give audiences an authoritative look at the new economic order in Asia. Hormats examines China’s expanding maritime presence, its New Silk Road Initiative to build closer infrastructure ties in the region, and China’s increasing tendency toward economic nationalism, particularly in the tech sector. Focused on both economic and strategic issues, this presentation provides invaluable insights into the opportunities and strong competitive challenges facing U.S. and Western companies.

Corporate Risk in an Age of Terrorism & Geopolitical Uncertainty

The dangers of terrorism are increasing and spreading, fueled by foreign fighters returning from Syria and Iraq and ignited by organizations such as  ISIS that inspire fanatics to commit terrorist acts. Business leaders need to understand how this environment can be politically destabilizing, particularly in the world’s most vulnerable societies. In this informative presentation, Robert Hormats offers an insightful assessment of vulnerabilities in key regions (Europe, China, India, Africa and the Middle East) and evaluates the unique risks faced by American corporations doing business in these areas. He also offers key strategies for partnerships with local intelligence and police, forging stronger relationships with American embassies and consulates and establishing closer connections with employees to avert internal problems.

Keeping Our Workforce Competitive in a Globalizing Economy

As the global economy expands, the U.S. will face increasing global competition, as well as increasing global investment, from China and elsewhere. New energy sources and production will also change the face of the U.S. and the global economy. All of these factors will dramatically change the types of skills that American workers will need to compete. Currency volatility will also add new uncertainties for American business and American workers – and for companies and countries on all continents.

Utilizing his experience as Vice Chair of Goldman Sachs (International) and working with a wide range of American and foreign companies and governments around the world, Robert Hormats provides a vision for future success in which businesses —especially small and medium size ones — can identify and take on new global opportunities and better anticipating global risks. Key to this success will be transforming the U.S. education system to ensure that schools at all levels provide students new and relevant skills. Hormats also calls for increased communication and collaboration between employers and educators to ensure that worker skills mirror business needs. And he discusses techniques for companies to anticipate future opportunities and risks and plan ahead by forging strategies to meet them. 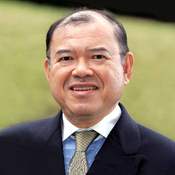