Ron Jaworski distinguished himself as the resilient quarterback that lead the 1981 Philadelphia Eagles to their first Super Bowl. Currently a football analyst for ESPN, Jaworski delivers game-day reports for NFL Match Up and NFL Prime Monday and was nominated for an Emmy in 1996 for his work as host of Eagles Game Live. Read More >

Until Jaworski suffered a broken left leg, he had led the Eagles to the NFC Playoffs four times and had started 116 straight NFL games, thereby setting a record for the most consecutive starts by a NFL Quarterback. During his ten years with the Philadelphia Eagles, he passed for nearly 27,000 yards, including 175 touchdowns.  He is the all-time Eagles’ leader in many passing categories, including career touchdown passes and career passing yardage.

Now a highly successful businessman, Jaworski brings together the sports world and the business world with enthusiasm and passion. He has successfully taken his leadership skills from the gridiron to the boardroom defining the lines where Sports meets Business. He has always exhibited an entrepreneurial spirit and today owns a professional sports team, a business relationship company, four golf courses, two hotels, a telecommunications company, a gym and two Showcase Sports Store.

Ron Jaworski and his family strive to give back to the community. They put their heart and soul in their foundation, Jaws Youth Playbook which helps improve the overall health and wellness of at-risk youth, primarily in the Greater Philadelphia area along with the NFL and United Way. He has served as a television spokesperson for Goodwill Industries, the US Department of Labor and the US Savings Bond Program.  Read Less ^

Being the Best That You Can Be

The Key to Great Teamwork & Success

"There’s no doubt you were the highlight of the evening. Calling people by name, referring to things you and the audience had in common and giving individual attention to those who approached you impacted them in an unbelievably powerful way. People not only commented on how much they enjoyed your speech but also on how much they liked you as a person. I don’t think I’ve ever seen someone endear so many people to him in such a short amount of time."

"The motivational speech on teamwork and success was excellent. You helped make the evening a big success in the eyes of our customers. You were very gracious and accommodating toward our customers, truly a professional! They had an opportunity for photos and autographs and this made the event truly a great experience for all."

"Our sales reps and employees have never been so excited, and are looking forward to your next appearance with us."

"You have a real knack for reading your audience and focusing your comments in the areas that are most relevant to their situation and business. You really got the group fired up!"

"Our sales reps and employees have never been so excited, and are looking forward to your next appearance with us."

"Your appearance was a real success for our athletic foundation and the great comments about you still haven’t stopped." 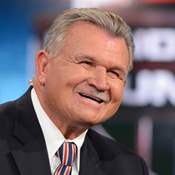 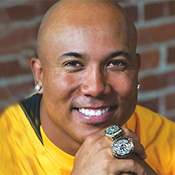