With China on track to overtake America’s global dominance, there is no better analyst of the economic, political and trade implications than acclaimed international relations specialist and author Sarwar Kashmeri. His latest book, China’s Grand Strategy: Weaving a New Silk Road to Global Primacy, which former Secretary of Defense Chuck Hagel said, "captures the essence of the real issues of our time," is the authoritative book on China’s Belt and Road Initiative. It was also named a centennial book of the Foreign Policy Association, where Professor Kashmeri is a fellow. Known for his extensive research and global fact-finding missions to see China’s influence in action, Professor Kashmeri’s keynotes are filled with informative case studies, illuminating insights and expert recommendations. His urgent point of view: The U.S. has a narrow window of opportunity to find a way to engage and fit into a world in which the rules of the game are going to be increasingly set by China. As the foreword to his new book puts it, "…If one is not at the table, there is always the risk of being on the menu." Read More >

A former international businessman, Professor Kashmeri brings a comprehensive global business perspective to issues of trade, investment, foreign policy, and defense. Before entering academia, he was the CEO of a New York based international technology company and a communications advisor for several Fortune 100 companies. He currently serves as an applied research fellow at the Peace and War Center, Norwich University. Active in many media, Professor Kashmeri has appeared on CNN, Sky News, C-SPAN, Fox, and German news network Deutsche Welle. He has also hosted China Focus, a podcast series for the Carnegie Corporation of New York. Professor Kashmeri has also appeared in New York Times International, The Guardian, U.S. News and World Report, and was the focus of a series of interviews with Xinhua, China’s global news agency. He is the author of three books and the U.S. Army War College’s monograph, NATO and the EU’s Common Security and Defense Policy; Intersecting Trajectories. He earned a B.S. in Aerospace Engineering and a M.S. in Engineering, both from Saint Louis University.

Appearing before audiences ranging from business groups to the World Affairs Council to the United States Military Academy/West Point and the United States Army War College, Professor Kashmeri "lays bare the challenges posed by China’s grand strategy for its rise to global dominance…and how America has failed to develop a broad, long-term grand strategy of its own." As nations watch the baton of leadership being passed, Professor Kashmeri provides invaluable guidance on preparing for nothing less than a new world order. Read Less ^

The Belt and Road Initiatiive (BRI), China’s  grand plan  to connect over 130 countries in Asia, Africa, and Europe to each other and ultimately, to China, is the largest infrastructure project in human history. China has committed over a trillion U.S. dollars to finance it — while the Asian Development Bank and other experts, estimate it will take over a trillion dollars per year over a decade to complete. Around the world, BRI presents many opportunities for U.S. and other Western businesses to collaborate with Chinese firms to fill many financial and technological gaps, in what President Xi calls "a new model of win-win cooperation." In this essential talk — which can be tailored to address the interests of any industry or organization, Professor Kashmeri provides invaluable background on the BRI, sharing insights into Chinese business culture while  highlighting the many opportunities to leverage capital, technology and expertise.

The European Union has stitched Europe into the world’s largest trading block and the richest group of countries in the world. But this impressive achievement is now being challenged by the growing wealth and ambition of China and its game-changing Belt and Road Initiative (BRI). China’s investment in Southern, Central, and Eastern Europe are already impacting the economies and geopolitics of several European countries. It has also set up its own trade group in direct competition with the EU. The "17+1" group of countries, as this Chinese led bloc is known, already includes 12 EU member countries and meets regularly to discuss and coordinate investments into Europe and infrastructure projects. Drawing upon his acclaimed book and his numerous fact-finding trips around Europe, Professor Kashmeri addresses key questions for business audiences: How will the EU accommodate this Chinese foray into the EU’s structure that is already reeling from Brexit and "America First" policies? How will the BRI affect the transatlantic alliance, the bedrock of the Western economies since World War II? Will the EU now see its economic future increasingly tied to China instead of the U.S.? Professor Kashmeri’s answers and insights are a must for anyone seeking to understand its growing impact and influence in Europe.

Winning Hearts, Minds and Economies: The Belt & Road Initiative in the Developing World

Just as the West is waking up to the impact of the Belt and Road Initiative (BRI), it is recognizing that Chinese investment and leadership have been reshaping the developing world and winning hearts and minds for decades. This is a big deal. Africa, for instance, is poised to become the largest business opportunity of the 21st Century, with household consumption reaching $2.1 trillion in 2025 and population peaking at 2.5 billion in 2050. Using Africa and other developing nations as examples, Professor Kashmeri unpacks the significance of the BRI as part of a grand strategy that will see China replace the U.S. as the world’s dominant commercial player and influencer. From Asia, where most nations are already dependent on China’s commercial influence, to the Middle East, where China is helping build refinery additions and investing in energy generating assets to the tune of hundreds of billions of dollars; Professor Kashmeri examines China’s rise and influence and how it is challenging U.S. leadership and alliances.

“Sarwar’s analysis of the Belt and Road Initiative opened our eyes to the far-reaching strategic and economic implications of the most ambitious infrastructure project in history. His thoughtful and differentiated views helped us understand that this initiative will be a tailwind offering attractive investment opportunities with unique risks. We are grateful that we were able to tap into his expertise and believe our newfound knowledge will be invaluable as we investigate potential investments.”

"I found your insight at the Fed Ex Access panel and your views on the current state of our economy very interesting. Thank you for so generously giving your time to our university and school of business. I hope to have the opportunity to meet again in the future."

- University of Mississippi, School of Business

"Several people came up to me and said that this was the best event we have had all year. We really appreciate you coming down and sharing your vast knowledge on China’s Belt and Road Initiative."

“I have known Sarwar for 20 years. When I was in the Senate and later as Secretary of Defense I always was informed more after he came to see me ... and always appreciated the help and guidance he gave me.”

“Sarwar Kashmeri’s examination of the Belt and Road Initiative serves to illustrate that China’s curation of economic and foreign policy interests around the world has yet to be addressed seriously by an otherwise distracted Washington.”

- George Magnus, author of “Red Flags: Why Xi’s China is in Jeopardy.”

“Kashmeri suggests that within ten years, China is destined to become the world’s most influential economic power while maintaining regional military dominance. This prediction, along with Kashmeri’s compelling argument, suggests that the United States should no longer try to contest China’s grand strategy, but rather it should collaborate with China and become part of the BRI!”

America and Europe after 9/11 and Iraq: The Great Divide

US scholar calls for better understanding of BRI 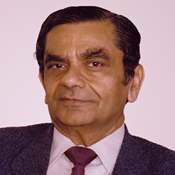