In 1997, long-time friends Mohammed Bilal and Josh "Boac" Goldstein formed the underground hip-hop group, Orange Flash.  For Bilal and Goldstein, the name invokes the moment of creativity, the "light bulb" of innovation.  Their performance piece, “The Color Orange,” follows in this vein by using their friendship to actively challenge the American notion of Black and White, Jew and Muslim, urban and suburban.  Through hip-hop, theater, and sheer mayhem, they enliven 10 steps towards the path of cross-cultural communication and understanding.  Read More >

Rapper and poet, Bilal is best known for his role on MTV's The Real World.  With a MA in Diversity Studies, he is actively involved in confronting some of today’s most challenging issues, such as diversity, AIDS awareness, and personal responsibility. His first solo album, beatbox metafiction, has been touted as groundbreaking for its sensitive lyrics and use of world music.  Bilal’s music has also appeared in the TV series Moesha, the NBC drama Kingpin, and has been featured in Sundance Award-winning film, Drylongso.

Hip-hop musician, Goldstein has been rapping for over 17 years and has toured with such artists as the Souls of Mischief and Del the Funkee Homosapien.

“The Color Orange” is a fun, vibrant, new look at race, racism, and the way we get along. Read Less ^

"I just wanted to let you know that the program with The Color Orange went very well.  The students and I were very happy with the performance and Mohammad and Josh are wonderful! Thank You."

"Thank you so much for your terrific time here. I was particularly moved by the high school performance. The audience was quite taken with you. And, of course, both of the free-style kids were great. It was a really great afternoon."

"All went well! They were very well received! Thanks!"

"Everything went great!  Preliminary feedback was similar to last year - HOME RUN!  They are terrific guys personally and their performance was fantastic.  It was a pleasure working with them and you.  I'm sure at some point we will have the opportunity to do it again.  Take care."

"Things went really well.  Our high school student group was extremely excited.  They went back to their school and composed their own rap.  Those in attendance thought it was awesome. They are truly two exceptional young men!!"

"We, at RIT, appreciate your continued commitment to pluralism in thought, perspective, and behavior that helps to build a culture of inclusiveness.

It was a pleasure meeting you and having you take a glimpse back in time at our luncheon honoring those who paved the way for vibrancy today."

One Race, One People, One Peace

I Am the Change World Tour 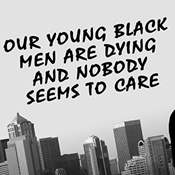 Our Young Black Men are Dying