American political satirist, writer, television host, actor, media critic, and stand-up comedian Jon Stewart is considered one of America's top social and comedic voices. When he was in his anchor chair on Comedy Central's The Daily Show with Jon Stewart, he "...breathed new life into a show that hadn't even seemed to need it" (The New York Times). Once he took over as the anchor of The Daily Show, the show saw higher ratings and raised the profile of Comedy Central. Read More >

During the 2000 election year and beyond, Stewart and The Daily Show led the way to the White House as the torchbearers of Comedy Central's “Indecision” election coverage that follows the elections, debates, and candidates from the Iowa Caucus and New Hampshire primaries straight through to the National Conventions, culminating with a one-hour special on election night. The show won two Peabody Awards for the coverage.

Prior to taking over The Daily Show, Stewart could be seen playing himself on HBO's critically acclaimed series-within-a-series The Larry Sanders Show. The final season saw, among other things, Stewart seemingly being groomed to take over the fictitious late-night throne from the perpetually paranoid Larry Sanders. Stewart also served as a creative consultant on the series.

On the feature film front, Stewart starred with Adam Sandler in the hit film Big Daddy and starred in the romantic drama Playing by Heart. Stewart also starred in The Faculty, a horror-comedy directed by Robert Rodriguez.

While it may be the conventional route for stand-up comedians to sign a book deal and expound on their early days inside dingy comedy clubs, Stewart took the path less traveled with his debut book, Naked Pictures of Famous People. A collection of fictitious and humorous what-if essays, Naked Pictures was a New York Times bestseller. He also wrote The Daily Show with Jon Stewart Presents America (The Book): A Citizen's Guide to Democracy Inaction, which received a Best Comedy Album Grammy Award for the audio edition. In 2010, The Daily Show with Jon Stewart Presents Earth (The Book): A Visitor's Guide to the Human Race was written and released by Stewart and other writers of The Daily Show.

For his work on The Daily Show, Stewart has taken home Emmy Awards for Outstanding Variety, Music or Comedy Series eight times, and Outstanding Writing for a Variety, Music or Comedy Program six times. Stewart was also named one of the 2005 Time 100, an annual list of 100 of the most influential people of the year by Time magazine. In 2009, President of Liberia Ellen Johnson Sirleaf made Stewart a chief. The following year, Stewart was named the Most Influential Man of 2010 by AskMen.com. Read Less ^

An Evening with Jon Stewart 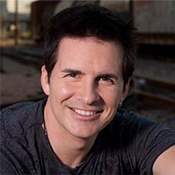