A comedian, writer, speaker, mother of 3 and actress, Kate Davis has the unique ability to find humor in any situation. Kate’s generous insight and outspoken character provides a powerful combination to help organizations empower their staff with effective tools for managing stress and sustaining motivation. Theatrically trained in England, Kate returned to Canada to a successful run on the Canadian stage. Read More >

From the theatrical stage to the many stages of motherhood, Kate found her newest passion at an open mic one night at a local comedy club. Now, a twelve-time nominee at the Canadian Comedy Awards including the prestigious Phil Hartman Award and the star of her own hour-long comedy special on CTV and the Comedy Network. Kate stars, writes and produces the web series, “Best Before” which also won at the Canadian Comedy Awards and was chosen for Standup and Pitch at Just For Laughs Comedy Pro. Kate has appeared on Breakfast Television, Star TV, Toronto 1,Prime, WTN, TVO and is on Sirius XM radio. Kate can also be heard on CBC Radio One, “The Debaters,” which she also wrote and was grateful to be a part of the Debaters Live theatre tour in 2018 with Live Nation.

As well Kate taped a gala at the Winnipeg Comedy Festival, The Hubcap Comedy Festival and the Kitchener Waterloo Comedy Festival and headlines across the country. Kate has shared the stage with Lewis Black and Seth Meyers and is also a favorite at corporate events. Kate tours globally with her comedy and speaking which has allowed her to open for President Bill Clinton and Barbara Walters to name a few. During the 2008 season of Last Comic Standing, Kate’s sense of humor endured and carried her into the finals in Canada.

Kate has a new Comedy Album out called “House Arrest” available on all platforms. Kate has been published in Today’s parent magazine and the Mom and Caregiver Magazine. Her first book the Breast Feeding Diaries won the iparent media award and her second book which came out in April 2019 called Second Best Mom - Stories, Tips and Okay Advice is now available on all platforms. Read Less ^

Humor in the Workplace

Kate Davis has the unique ability to find humor in any situation and to offer creative solutions to defuse the frustrations in the home and workplace. Kate’s generous insight and outspoken character, provide a powerful combination to help organizations empower their staff with effective tools for managing stress and sustaining motivation.

Between our jobs, home, relationships with family, friends and co-workers learning how to balance our busy life demands a strong sense of Personal Development and most importantly a Sense of Humor.

People, who attend Kate’s “Balancing Life with Humor” lecture, leave with an understanding of practical techniques for refueling, rediscovering and reengaging their true selves. Learning to use humor as an instrument of communication creates an atmosphere of compassion, caring and productivity. Read Less ^

In “Connectivity,” Kate Davis shows the audience how to establish, cultivate, and keep connections that lead to productivity and success both in business and our personal lives. Whether it’s a CEO connecting with their staff, a client connecting with their customer, or departments connecting with other departments, good communication and rapport within an organization is the source of a flow that leads to creativity, quick resolutions, and a deeper understanding among staff of the overall business purpose. Staying connected to colleagues keeps things on track and is one of the most important elements to an organization’s success. Read Less ^

How our thoughts are affecting our reality Read More >

Kate’s keynote on “Mind over Laughter” explores how mindfulness through humor can help us achieve self-awareness that has the power to affect all areas of our lives in a positive manner. By focusing on the present moment and therefore letting go of negativity we are able to be more present to the life we are in and that is how we expand and create affirmative change.

Kate teaches practical methods of how to achieve mindfulness through an entertaining, funny journey that leaves her clients with authentic ways of getting in touch with oneself through visualization, playfulness and storytelling.
For over a decade Kate has explored techniques of how lightening up and Read Less ^

Out of My Mind Back in 5 Minutes

A journey from depression to expression Read More >

Kate’s Keynote “Out of My Mind…Back In Five” explores techniques of managing our mental health and gives practical ways of staying healthy and positive even through the toughest times. Kate’s inspiring, humorous and sometimes touching stories take us on a journey from Depression to Expression. How she found comedy and how it helped her discover self-worth, confidence and to fight the negativity in her own mind that was keeping her from living the life she deserved.

“Back In Five” explores the way we feel about ourselves and others, as well as our ability to manage our feelings and deal with everyday difficulties.

From practical methods like learning one- minute stress strategies that you can do at the office or home or breaking up the monotony with Rejuvenation 101 (That’s a long list). To the methods available to us for taking charge of our own mental health including: How we think about ourselves, being grateful, being in the present, sleep, diet, exercise to name a few. All these methods can ultimately boost our mood, build resilience and add to our overall enjoyment of life.

Audiences leave this keynote with the feeling that knowledge is power and that we all play a role in our mental health. Read Less ^

Your Leisure Time Should not be Folding Laundry Read More >

This Keynote gives parents, caregivers, educators, social service providers the tools to help defuse the chaos and stress of their lives through humor. Kate helps them to remember themselves, accept where they are and not feeling guilty about where they are not. It combines stand-up comedy with practical techniques to raise children.

“Fun cancels out stress and brings everyone into the moment.” This is the recipe for a healthy relationship when it comes to raising our children. Everything changes when we become parents, I think the show “Survivor” shouldn’t take place on an island but a new parents’ home.

It’s challenging not losing yourself in the process but with a few techniques likes being more playful and using your intuition life can be more joyful and relaxing. Discover the different ways that men and women deal with stress, techniques of dealing with siblings fighting and how to truly take care of yourself so you are able to be more present to the life you are living now.

This keynote blends techniques of improvisation, visualization and affirmations. Parenting is a great lesson in letting go. You give birth, you let go. You nurse, you stop, you let go. They s tart school you, let go. They move out, you let go. That lesson of “Letting Go” is way easier with you in tacked. Read Less ^

"Kate’s presentation was phenomenal! She was funny, engaging and her stories were real – everyone could relate to them. As she shared stories with us, she imparted messages of hope and she communicated her wisdom to us …in order to be resilient we need to find joy in what we have today, in what we are doing today and on the goals for tomorrow. She definitely inspired us! Her presentation set the stage for our Reconnecting 2020 Conference."

"Kate was so fun and friendly to work with leading up to the session and put our minds at ease in knowing the event was going to go well. And we were not wrong; our virtual attendees all indicated that the laughs were very much needed during these stressful times! It’s not always easy to see the humour in our daily lives, particularly for leaders in our industry that has been so impacted by Covid. Thank you Kate for the reminder to find what gives us joy, make ourselves a priority, and lighten up!"

"Thanks, so much for making our event such fun. We all had a great time and certainly learned a thing or two from you. We were talking at lunch after you left and realized we were remiss in doing something for you. So we would like to give you your fourth standing ovation."

"Kate was truly a hit. She conveyed many important messages to a group of women under stress by reminding them to incorporate things they love into their lives incrementally, to use their intuition, and to combat stress with laughter. Not only did she entertain these women with side-splitting stories with which every woman and mother can relate, she gave them a much needed shot of inspiration."

- The Junior League of Toronto

"I thought her presentation was a great balance between humour and valuable information on how to bring more humour into your life. It was a wonderful evening filled with laughter."

"The feedback I received so far from staff was that her talk was the highlight of the day. Her witty banter and engaging dialogue was superb and the broken telephone exercise was a hoot. However, it was Kate herself that made a difference and like our M.C. Ray summed up 'she is a real live wire'."

- Ministry of the Environment

"On behalf of the Tillsonburg District Chamber of Commerce, I want to thank you for agreeing to speak at our Awards of Excellence event. The feedback from our guests has been overwhelming. They LOVED you! So many people took the time to grab me after the event was over to tell me how much they enjoyed having you there, and what a great addition you were to our program. On Friday, I received tons of emails saying the same."

"Thank you once again for attending Gamma-Dynacare's annual Symposium event this year and for your uplifting session. I think your key messages are very relevant. Most importantly, I think you struck a cord with our people – I don't think I have seen them laugh this hard since I joined the company 9 months ago."

"Kate was wonderful! The nurses had a great time (and you know we can sometimes be a tough crowd - we take ourselves very seriously!). Kate was warm and funny and engaged everyone in your presentation. Kate was very intuitive to who her audience was and I think by the time she left we felt we had made a friend! Thank you again for your support and please let Kate know we loved her!!"

"You wouldn't believe how much impact your workshop had on me!!! I attended your workshop for U of T "Humour at Work"... I am changing my attitude and the way of thinking. From this point of view, I would like to say "thank you" for your outstanding speech about humour and what it may bring to people's lives."

"I want to thank you so much for coming out and speaking for us and making our conference such a great success. I know Rosy has been in touch with you and has given you some feedback from happy participants - but this is on a personal level from me - it was great you came through for me and saved the day when Carilynn was not able to make it." 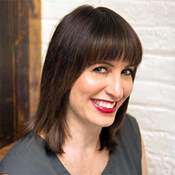