In sharp contrast to his Shark Tank reputation for investing in risky start-ups, O’Leary’s current acclaim on Wall Street comes from his street-beating success as Chairman of conservative O’Shares ETF Investments managing over a half a billion in assets. Designed for long-term investors, O’Shares was lauded by Forbes for enjoying “a gush of investor inflows and eye-popping returns” and “a formula for beating the stock market." In its first year, O’Shares outperformed every benchmark through a conservative strategy focused on income, wealth preservation, and capital appreciation. As the Chairman of O’Leary Financial Group, he leads a group of 44 companies that includes O’Shares, O’ Leary Publishing, award-winning O’Leary Wines (serving as Chief Sommelier) and a continually growing roster of companies. In addition to Shark Tank, O’Leary appears as a contributor on CNBC’s Squawk Box, ABC, CNBC and CTV and is the bestselling author of three books: Cold Hard Truth, Men, Women and Money and Family, Kids and Money. He also lectures future entrepreneurs at MIT, Notre Dame, Waterloo and McGill, belongs to the prestigious Hamilton Trust in Boston and is an avid chef, wine lover, world traveler, electric guitarist (and guitar collector) and die-hard New England Patriots fan.

O’Leary’s success story began like many: “with a big idea and zero cash.”  Unlike most, he eventually built a fortune launching a succession of groundbreaking companies that were acquired for billions. In 1986, he founded SoftKey Software Products (later called The Learning Company) in his basement. Under O’Leary’s leadership, The Learning Company became the undisputed world leader in educational, reference and home productivity software. It was later acquired by Mattel for $4.2 billion. In 2003, O’Leary co-founded Storage Now, which was acquired only four years later for $110 million. His next investment, Stream Global Services, was acquired after seven years for $820 million. In 2004, O’Leary began appearing on business programs on television. This included Discovery Channel’s show Project Earth and ABC’s Shark Tank. A Shark since 2009, “Mr. Wonderful” has been integral to the show’s tremendous success as one of America’s most popular family shows. Shark Tank recently won its fourth Emmy and O’Leary has called it “the most successful venture capital firm on earth.”

Sharing a life story that began with humble beginnings and reached the pinnacle of business success, Kevin O’Leary’s keynotes are fueled by a genuine passion to pass on what he has learned and motivate others to achieve. From what’s next for financial markets to why it’s almost always better to hire a woman CEO, he shares hard-won wisdom, actionable advice and time-tested philosophies that will inform your perspectives, challenge your potential and quite possibly, change your life. Read Less ^

The Essence of Leadership

What You Need to be Successful

What We Can Learn from Shark Tank: The Power of the Entrepreneurial Dream

Kevin O’Leary has called Shark Tank “the most successful venture capital firm in the world.” In this highly motivational keynote, he focuses on what entrepreneurism and Shark Tank are really about: the pursuit of personal freedom. Read More >

Kevin O’Leary’s Financial Briefing: What’s Next in the Markets

There are very few people in the world that understand the financial markets like Kevin O’Leary. If your company deals at all with equities, debt, currency, financial exchanges, gold, minerals, commodities or any other asset class, he’s your guy. As Chair of O’Shares and as a personal investor, O’Leary has studied and invested in every asset class out there, and has his eye on key emerging trends and issues such as compliance, A great opportunity for CEOs to talk shop or for large audiences to get an invaluable overview of the markets. O’Leary tailors each briefing for audience interest and expertise—and always includes time to cover the most frequently asked questions about Shark Tank.

Why Women Make the Best CEOs

Kevin O’Leary currently owns 44 companies, including many funded as start-ups on Shark Tank. After 10 years, he analyzed the data to confirm what he had already known: All of his returns have come from those run by women. Why had his women-owned businesses returned capital faster? Combining his own observations (“If you want to get something done, give it to a busy mother”) with hard numbers and nods to his investor mother (her conservative investing philosophy was adopted by O’Leary’s highly successful O’Shares ETF Investments) and the many women in his companies; O’Leary makes a clear business case for women CEOs and how women-run organizations operate.

“Let’s just say, WOW! From the beginning until the end, working with Kevin O’Leary as a keynote speaker for my virtual convention was (and still is) a meeting planner's dream. He went above and beyond to turn out an exceptional curated keynote with actionable takeaways. The amount of time, consideration, and thought that he put into the presentation blew me away and it was by far the #1 talked about session. With the added attention span battle that virtual events present – my attendees were locked in and engaged. He will be someone that I will highly recommend to my fellow meeting planner friends until I’m told to stop!”

- Director of Meetings at the American Land Title Association

“When the opportunity arose to be the exclusive sponsor to enable Mr. O’Leary to speak at an industry conference – the decision was immediate. We knew his business acumen coupled with his popularity would draw people to his session. In a virtual setting, the potential for distractions are even greater for people, and I knew attendees would be sure to tune in for his presentation. Of course we would prefer all of us to be able to be in person, however, even for an all virtual event – Mr. O’Leary was able to keep everyone’s attention with his comedic wit, intelligence and information relevant to the times we are in. I would highly recommend having Mr. O’Leary speak at your event, conference or company town hall – I had numerous people tell me how 'Wonderful' he was!“

Cold Hard Truth On Men, Women, and Money: 50 Common Money Mistakes and How to Fix Them 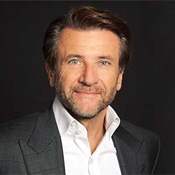