From humble Southern beginnings to breaking barriers on Wall Street, Martina Marshall Edwards is the epitome of refusing to allow your circumstances to dictate your outcome. A finance major and graduate of Alabama’s Tuskegee University, a historically black college and university, Edwards went on to become the first African-American female equity trader for Merrill Lynch and in the 200-plus-year history of the New York Stock Exchange (NYSE). It also made her the only active African-American woman seat holder among its then 1,366 members. (Before the NYSE became public in 2006, individuals and companies had to either purchase or lease a seat to serve as a broker). Read More >

In 2001, the NYSE was a dynamic, fast-paced, male-dominated environment with high-stakes trading activity, a steep learning curve and little to no room for error. It’s also was a place, despite many obstacles, where Edwards thrived. In 2004, after three years and two promotions, she earned a unique opportunity to become a member of the NYSE on behalf of Merrill Lynch. (It would take another 13 years before the second Black woman broker — Lauren Simmons — arrived.)

Edwards is a walking example of how access can dramatically shift the trajectory of a career. Many have asked, “How did the little girl who grew up in a two-bedroom mobile home in rural Alabama with livestock in the backyard make it to the Big Apple, let alone the Big Board?”

Known as the “Belle of Wall Street,” Martina is an inspiring and dynamic speaker. From humble financial beginnings to reporting to the NYSE the week of 9/11, Martina is no stranger to adversity. She adamantly believes that every twist and turn ultimately molded and shaped her into the resilient individual and strong leader that she is today.

Edwards knows that representation matters and staunchly believes in the importance of inspiring the next generation of leaders, particularly women. An investor by trade, a common thread has been her desire to build equity through access, opportunity and exposure for underserved people and places.

Edwards has always wanted to step into roles that have an impact and leave an impression on people’s lives. Her 20-year career journey has spanned multiple industries from public to private equity, non-profit leadership and venture capital. Through her rewarding work as a C-suite executive at Access to Capital for Entrepreneurs (ACE), Edwards is helping to level the playing field by giving business owners a chance when others can’t or won’t. Like homeownership, business ownership is an asset that supports closing a widening racial wealth gap, building financial stability through a ripple effect—a collective prosperity that goes beyond the immediate gain of an individual business owner.

Raising over $25 million in grant funds in just under three years — including the largest individual and corporate gifts in ACE’s history — finding ways to support traditionally underserved small business owners and entrepreneurs with capital, coaching and connections is core to her work.

Martina has penned articles such as “The Fragility of Small Business” and been featured on CNN Money, CNBC Make it Real, PrivCap, WABE Radio, The Atlanta Small Business Network and in the Atlanta Business Chronicle. Read Less ^

On Breaking Barriers in Finance | CNBC Make It

Martina Edwards may be a lot of things but quitting in the face of adversity has never been one of her attributes. In this motivational talk, Edwards will share her journey — from being raised in rural Alabama to breaking barriers on Wall Street and beyond. The audience will be inspired by her personal and professional experiences as she connects the dots on the power of bold thinking, self-confidence, serving others and living up to your own greatness. She explores activating the power within you to overcome not only challenging external obstacles but also internal fears that can become barriers to success. Audiences will walk away motivated to dig deep and push through to achieve the greatness that is in store for them.

For Martina Edwards, thinking outside of self and opening doors for others has always been at the forefront. From her early days growing up in Beatrice, Alabama, which has a population today of just under 400 people, she is familiar with wealth, access and opportunity gaps. And throughout her 20-plus year career, she’s made it her mission to be an investor in people and places. Edwards is passionate about serving others and closing the gap of economic divide. In fact, equity is central to all that she does. As an executive at ACE, she helps underserved small business owners and entrepreneurs with capital, coaching and connections. Their success, in turn, lifts their communities as a whole. “Economic parity is when you truly have freedom,” Edwards says. In this inspiring talk, Edwards will share her personal journey and the obstacles she faced, which are still in place for so many others today. She’ll discuss the importance of Diversity, Equity and Inclusion (DEI) and how we can all actively participate in empowering people to create economic prosperity that transcends to others.

The Importance of Leadership & Mentorship

Martina Edwards’ professional journey has taken her to the highest of heights. But what she’s most proud of is her ability to help others. In fact, one of Edwards’ personal mantras is to “Serve Invest and Return Value (SIRV).” Knowing that equity, access and opportunity lead to social benefits that reverberate through communities creating financial upswings and collective prosperity, she offers sage advice and insights from her two decades of experience being a leader, mentor and multiplier. From her five years in New York City leading an alternative investment fellowship program promoting diversity for underrepresented talent to her executive roles in community and economic development democratizing access to capital for entrepreneurs, she underscores the value of diversity and role of mentors in her personal career journey.

When it comes to struggling through poverty, Martina Edwards has had a front-row seat. After her parents divorced when Edwards was nine, she watched her mother deal with many financial hardships — working two jobs to make ends meet and going through bankruptcy. Yet despite those hard times, Edwards says she never felt like she lacked for anything. The community was tight-knit and she experienced a wealth of love from her huge extended family. That is one of the reasons why Edwards is so passionate about helping others. In this talk, she discusses with students what it takes to be successful; why you need to find your own path; and how to go out in the world career-ready. She also discusses the importance of being financially literate: why you need to invest, have an equity mindset and give back to others. Edwards proves that hard work and smart financial moves, coupled with talent, are a recipe for success. And by taking these steps now, they can change your life. It all starts by owning your greatness and forging your path.

"Martina Edwards delivered two dynamic presentations to early-career, mid-level, and senior members of our Association addressing financial literacy and well-being. She incorporated her own inspiring, personal story to bring the subject matter to life; addressed essential, real world financial topics; and encouraged participants to apply learning through a helpful workbook. She made sometimes difficult topics grounded, accessible, and fun. Our attendees were thrilled! NASPA is grateful for the opportunity to work with APB in creating educational forums for Martina to deliver this exciting and highly practical content."

"Martina provided a master’s class on how to achieve excellence with integrity during our motivational speaker series. Her exciting journey from academic life to becoming a historic first at the NYSE was so inspiring and insightful for our students. A shining example of where hard-work and tenacity can get you."

"Martina was amazing! We loved the connection and wisdom she brought to the conversation and it was great for our students to hear about the work she is doing through ACE. The students really appreciated connecting with her and her class appearance was a hit as well. Overall, exactly what we were thinking for this talk!"

"A mom herself, Martina is passionate, poised, vulnerable and relatable. A highly sought after session, our attendees were motivated by her personal triumphs and history making career. We would welcome her back!"

"Her talk about financial vision and building a lasting legacy was outstanding. A true homerun that empowered parents, especially moms to take stock of decisions today, which can influence their overall wellness, specifically financial in the future. It was such an additive component for our metro chapter conference."

- Member, Atlanta Chapter of Jack and Jill of America

“Oh my goodness, can I just say THANK YOU for having Martina come speak to us today. Martina was sincerely the best conveyor of knowledge I think we’ve ever had in our DE&I conversations, and I will say in most of the speakers we’ve had in our leadership meetings as well. Her tenacity is fierce. I love how she broke down equity to a very understandable level to best explain to those who question why we grant contracts, invest money, and develop initiatives in the company and surrounding community to bring forth equity. Her analogies were spot on and excellent talking points for us to take forward both at home and in our communities. She was inspiring on some many levels, but I appreciated her “realness” the most.”

Martina Edwards, One of Wall Street’s First Black Women Traders, is Building a Legacy of Wealth in Underserved Communities 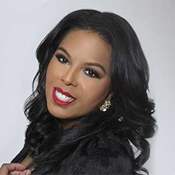