Dan Holzman and Barry Friedman are the Raspyni Brothers. Their original blend of mirth, mayhem, and madness have earned them two International Juggling Championships, a place in the Guinness Book of World Records, and multiple television appearances including The Tonight Show with both Johnny Carson and Jay Leno. Read More >

The Raspyni Brothers have taken their twisted brand of vaudevillian humor to over 1000 successful corporate events around the world including IBM, General Electric, Sprint, Toshiba, Olympus, Procter & Gamble, and Apple.

In addition to the tremendous success they enjoy in the field of corporate entertainment, the Raspyni Brothers have toured as an opening act for megastars such as Robin Williams, Billy Crystal, Howie Mandel, Dennis Miller, and Tom Jones. Other career highlights include a Presidential Command Performance at the White House, a Showtime Television Special, the Academy Awards, a performance for the King of Spain, and an invitation from Judge Lance Ito to perform for the sequestered O.J. Simpson jury.

Packing their time on stage with a dynamic mix of character and charisma, this exciting comedy team never fails to win over even the most hard-to-please crowd. Their show has often been described as a "sitcom with props."

Through thoughtful customization, the Raspyni Brothers brilliantly demonstrate the elements of teamwork and success through interactive programs that will educate while they entertain. In addition to their headline comedy show, they offer interactive workshop packages on Total Team-Building and Juggling the Principles of Success. They also excel in their role of Masters of Ceremony, executing traditional tasks with unusual flair - a combination of variety skills, improvisational comedy, and material customized to any event. Read Less ^

Juggling the Principles of Success

Willy Wonka and the Art of Selling 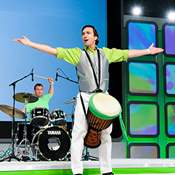