As one of very few marketers to work at both YouTube and Instagram, Jon hasn’t just seen the digital revolution; he helped create it. During five years at YouTube, Jon was Head of Creator Product Marketing. In this role, he worked with YouTube's biggest celebrities and brands to grow their audiences — and their incomes. Last year, Instagram recruited Jon to lead marketing for their new video platform with goals of empowering a new generation of stars and businesses. Named Forbes 30 Under 30, Jon is heralded for "cracking the code for going viral" and ranked by NPR as "one of the best commencement speakers since 1774" alongside Steve Jobs, Jeff Bezos and John F. Kennedy. Read More >

Jon also has a track record of creating viral content himself. As the cartoonist behind "Every Vowel," which Business Insider called "Dilbert for a new generation," Jon built an audience of 400,000 subscribers who read his weekly comics. In fact, Jon’s cartoons got so popular that Zappos CEO Tony Hsieh commissioned him to paint life-size murals for his office and Adam Grant used Jon’s cartoons for his TED talk, which has 12M+ views. As a writer for Time and Forbes, Jon’s articles regularly reach #1 with million-plus views. Lastly, as the creator of a show called "Admazing," Jon analyzes the world’s best and worst commercials from Apple, Pepsi, Samsung and more.

It’s no wonder why Jon’s keynotes get standing ovations. His speeches combine learning with laughter and insight with inspiration. No fluff. No BS. Only the practical tips, tools, and templates that audiences crave. He’s the perfect speaker for corporations looking to increase their creativity, productivity and marketing firepower. He’s perfect for conferences — where he not only fills seats, but keeps audiences totally engaged.  And he’s perfect for colleges and high schools who want to help students learn real life skills. No matter your event, Jon has a keynote for your audience — or he’ll work with you to create one. Read Less ^

Cracking the Code on Going Viral

Storytelling Secrets: How to Reach Millions With Your Message

Reaching millions of people isn’t an accident. It’s a process — one that Jon Youshaei has mastered as a leading marketer at YouTube, Instagram and writer for Forbes and Time magazines. Lauded by Inc. magazine as a "creative force who knows how to use marketing to inspire movements," Youshaei is the voice behind many popular videos, articles, and posts that set records for shares, views and follows. As one of the few marketers who has worked at both YouTube and Instagram, he works with today’s biggest celebrities and businesses to create viral content that’s ahead of cultural trends. In this keynote, Jon outlines the exact steps to craft engaging headlines, simplify your message, and increase your shareability so you break through the noise to reach your target audience.

Who said the Super Bowl is the only time to discuss amazing commercials? In this keynote, Jon analyzes the world’s best and worst commercials to find out what really makes a great ad. He’ll dive deep into the psychology, creativity and copywriting while rating each ad on a scale of "Admazing" to …"Adtrocious." Whether you’re marketing a startup, running campaigns at a bigger company, or just building your personal brand, this presentation will provide you with the case studies, templates, and tools to get ahead.

Great copywriting is the bedrock of great businesses. Without it, your products go unnoticed. Your newsletters go unopened. Your social posts go unread. Your videos go unwatched. In this keynote, Jon provides a crash course on how to use copywriting to get results for your business. He’ll outline the exact process he used to become one of Forbes and Time magazine’s top writers and get ranked as one of Inc. magazine’s "Top 7 Digital Marketers to Keep Your Eye On," and Entrepreneur magazine’s "Top 10 Marketers." You’ll learn to write in a way that’ll make your colleagues and customers nod their heads, drop their jaws, and open their wallets.

Beyoncé vs Shakespeare: Surprising Secrets To Increase Your Creativity

See why this keynote has been one of the most highly-requested talks from many Fortune 500 companies, including AT&T, American Express, Google, Allstate and more. Youshaei mesmerizes audiences by taking them on a journey through time, explaining how innovators from Shakespeare to Beethoven to Beyoncé rose to prominence. Hint: it’s not what you think. You’ll not only discover a hidden side to these "well-known" stars (especially, Beyoncé), but you’ll learn the secrets to how they stayed relevant and boosted their creativity so you can do the same regardless of your industry, profession or age.

Building Better Teams: Lessons From Living in an Apartment with 28 YouTube Celebrities

What if we told you that 28 of YouTube's biggest stars live together in the same apartment? Together, they have a combined audience of over 150 million subscribers. It's a secret community where stars are made, ideas are born, and million dollar deals are signed. It’s also a groundbreaking case study in how to build teams, improve culture, and foster collaboration in today’s world. As YouTube’s former Head of Creator Product Marketing, Jon Youshaei has not only studied this secret community of YouTube stars, but he lived with them. He’s learned first-hand what happens when the cameras turn off. In this keynote, Jon shares how these influencers work together, create teams, and rise to prominence with very few resources. You’ll hear entertaining stories from his time in the apartment and actionable insights that you can apply to boost your culture, creativity, and efficiency.

"Jon is awesome! Amazing speaker and amazing human being."

“THANK YOU for helping us close out 2020 and doing an incredible job keynoting at Digital Summit at Home. You’ve helped make our virtual events a success this year and we’re incredibly grateful.”

"If anyone has cracked the code on how to go viral, it's Jon Youshaei. This Wharton alumnus is a creative force who knows how to use marketing to inspire movements for millennials."

"Jon Youshaei is incredibly insightful, inspiring and entertaining. From Millennials to Gen Z, he knows how to empower today's young professionals like few others do."

"Jon has the unique and extraordinary combination of exuberant youth and seasoned wisdom, the likes of which I've never seen before. His words are more than just words – they evoke profound feeling. Jon’s charisma and warmth draw you in, and his intellect and experience make you want to stay and be in his presence."

"Jon Youshaei is one of the most highly creative thinkers of our time. It's rare to find someone of his talents who sincerely wants to help others succeed. He’s one of the good guys. Keep your eyes on Jon, he has a lot to offer our world.”

“Thank you for suggesting Jon for our program this morning! He was an excellent speaker, incredibly knowledgeable, and had such a friendly demeanor. He was able to deliver a content-heavy presentation that was full of actionable tips for our audience.”

“Jon is a great speaker!”

Business Insider: This Googler Wants To Create The Dilbert For His Generation 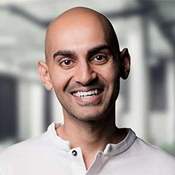