Lauren Sisler is a two-time Emmy award-winning sports broadcaster who joined ESPN and SEC Network in 2016 as a sideline reporter for both college football and gymnastics. Read More >

As a sportscaster and former collegiate gymnast, Lauren is passionate about sports, but even more passionate about telling the stories of the coaches, athletes, and fans who make it more than a game.

Her life was not always defined by victories. In 2003 as a freshman at Rutgers University, tragedy struck her world when she unexpectedly lost both parents within hours of each other to their concealed battle with prescription drug addiction. On her journey through grief, Lauren bravely emerged from the shadows of shame, embraced her story, and found hope again.

“I carried that shame until I finally realized I wouldn't let the pain I harbored define me, just like it didn't define my parents.”

Lauren realized that embracing her story and making peace with it had the power to heal, and she could inspire others to do the same.

Through her authenticity and vivid storytelling, Lauren’s presentations take listeners on an emotional passage that ignites gratitude and a reimagined purpose in their lives.

“Your story is significant. Learn to love it, then do something with it.” Read Less ^

As an 18-year-old at Rutgers University, Lauren Sisler’s reality was shattered when - within hours of each other - she lost both parents to their concealed battle with prescription drug addiction.

In the weeks and months to follow, Lauren was catapulted into a new, painful reality, one in which the picture-perfect life as she knew it was overshadowed by grief and shame.

Despite unfathomable adversity, she pursued her passions and rose in the ranks in the uber competitive field of sports broadcasting. Lauren is now a two-time national and regional Emmy award-winning sports broadcaster with ESPN and SEC Network.

Among the myriad of truths she gained at a young age, Lauren learned that success is often defined by defeat, and our approach to life must include viewing circumstances through a lens of purpose and gratitude.

“Sports is my passion, but my purpose is to share what I learned from my parents’ story – and how I learned to fall in love with my own.”

She shares invaluable insight into the secrets of successfully overcoming adversity and the fundamentals of resilience that are now written into the chapters of her story.

Audiences will learn how to:

Unlocking the Shackles of Shame

As a freshman at Rutgers University, Lauren Sisler unexpectedly lost both of her parents within hours of each other to their concealed battle with prescription drug addiction. She had a choice to make: hide the story and suffer alone, or use her struggles to help someone walk out of the shadows. Read More >

It was only when Lauren started working as a reporter for ESPN more than a decade after the death of both her parents that she started to truly undo the shackles of shame.

"In my job, I find the truth in athletes' stories and report on how their personal lives shaped who they are. And yet the shame I inherited stopped me from telling the truth about my own story. By facing my trauma, I discovered hope amidst the pain I felt from my parents' addiction. It has shaped me into who I am."

Lauren is an avid addiction prevention advocate, dedicated to breaking stigmas and eliminating the shame associated with substance abuse and mental health disorders.

In her keynotes, Lauren takes audiences behind the scenes of her extraordinary journey, and how tragedy ignited purpose and gratitude in her life.

Audiences will learn how to: 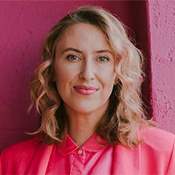